How to Pack Mindfully

I didn’t know what I’d need for my first extended meditation retreat, and I’d never been to the Bay area in winter, so I packed enough for a year in any climate – just to be on the safe side. 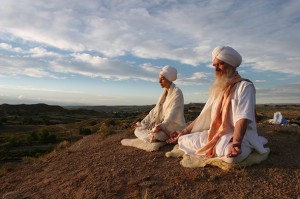 After paying penance in the form of an overweight-bag fee at the airport, I lugged my 90-pound albatross up a steep hill at Spirit Rock Meditation Center.

As I neared the top, sweaty and breathless, I saw the internationally renowned meditation teacher Jonathan Foust wearing no shoes and a backpack — his only bag. That was my first lesson in traveling mindfully.

About a year later, I attended a talk Jonathan was giving about letting go, and he shared a metaphor about packing that changed my perspective on preparing for travel.

“Every time I come back from traveling with one bag I’d carefully note what I didn’t [use],” he said. “I took that as a [way to ask myself] ‘What am I holding onto that I really, really, don’t need?’”

Traveling light is important for Jonathan because he spends much of his time leading meditation and yoga retreats across North America. As someone I look to for guidance on all things spiritual, I wanted to learn more about how he applies mindfulness wherever his journey takes him in life.

Here are some meaningful tips that came out of our conversation:

1. Think about what you’ll actually need. I was so nervous and excited about the month-long retreat that I didn’t give much attention to what I’d need once I got there. Jonathan says, “When we’re not aware of the circumstances we’re going into, we tend to over-prepare.” That’s exactly what I did, thinking maybe I’ll need this, as I put one needless item after another into my bag.

Practical Tip: One of Jonathan’s simple rules: “I think of the coldest temperature that I’ll be in, and [stop packing when I know that] if I’m wearing everything I have, I’ll be fine.”

2. Make mundane tasks an exercise in mindfulness. When I was packing for the retreat, I thought that if I brought enough clothes, I wouldn’t have to do laundry, which would free me to concentrate fully on meditation. Yet seeing Jonathan carefully wash his socks in the sink throughout the month shifted my perspective; I realized I could make any activity into a sort of meditation. As Jonathan put it, “If you’re willing to make a mindful ritual out of rinsing your clothing, you can get by with very, very little.”

Practical Tip: Jonathan’s preferred laundry method on the road is converting a waterproof bag into a “six-ounce washing machine.” He puts his clothes inside with some water and a little bit of soap, seals it up, shakes it around, then repeats the process sans soap until the suds are all gone. Voila! his drying method of choice? Rolling up his clothes in a towel to wick the moisture out. The next morning, you should be good to go.

3. Keep it simple. Jonathan told me that he heard President Obama wears suits in two different colors so he can devote as little attention as possible to what he’s going to wear. Similarly, Jonathan tends to wear only two colors, black and white, so matching is not a problem for him. “The simplicity increased my happiness level quite a bit,” he says.

Practical Tip: Whether or not you sense that packing just two colors works for you, consider that the less you think about what you’re wearing when you travel, the more energy you’ll have to be where you are.

4. Find your balance. Jonathan says that while packing light is a priority, the decision-making process should always support a “sense of safety and preparedness.” But, as he was quick to point out, arriving at that balance is a very personal thing. He has one friend who brings a gigantic suitcase wherever he values wearing clothes that match his mood. Jonathan also knew a teacher at Kripalu who traveled with a change of shirt and underwear and not much more. It’s about being conscious of what’s important to you, Jonathan says. “When I’m really mindful about what I carry, I feel more secure — I’m more open to the unknown.”

Practical Tip: Think about what’s truly valuable to you when you’re outside of your comfort zone and make sure you pack things that support your needs.

5. Focus on what you can control. Before the month-long retreat I’d spent so much time considering the uncontrollable — what the retreat would be like and how it would change me — that I overlooked simple details, like packing a razor and shaving cream. Jonathan says, “There are only two basic categories: the things I have control over, and the things I don’t have control over.” When he has no control over something he pauses and acknowledges it, then brings his attention back to what he can control.

Practical Tip: Jonathan’s developed a method of creating modules for organizing his travel needs. For instance, his “tech module” (iPad, smartphone, camera, battery chargers, etc.) fits into a single silnylon bag and his “laundry module” (waterproof bag, elastic cord, inflatable hangers, sink stopper, detergent) goes in a gallon zip lock container. Other modules include self care, first aid, toiletries, and clothing. When you think of things in this way, he instructs, you’re less likely to forget something important.

Not long after my conversation with Jonathan I put these tips into practice on a five-day vacation, and it freed me to relax and open more deeply to a new place. Try it out in your own travels and see if it allows you to be more present on your travels.

And true to the spirit of his approach, keep exploring the practices that work for you and discard the rest.

Jared Gottlieb is a storyteller and meditation teacher who happens to work in the Standards & Practices department at National Geographic.

The End of the World